Trekking to Maragua Crater from Sucre

During our stay in Sucre we went on a two day hike to the Maragua Crater, a beautiful area just outside of Sucre.

We weighed up the offerings from several other tour companies including Condor Trekking and Joy Ride Tours. In the end we settled on Jaku Trekking as they were slightly cheaper and offered a similar route / experience. 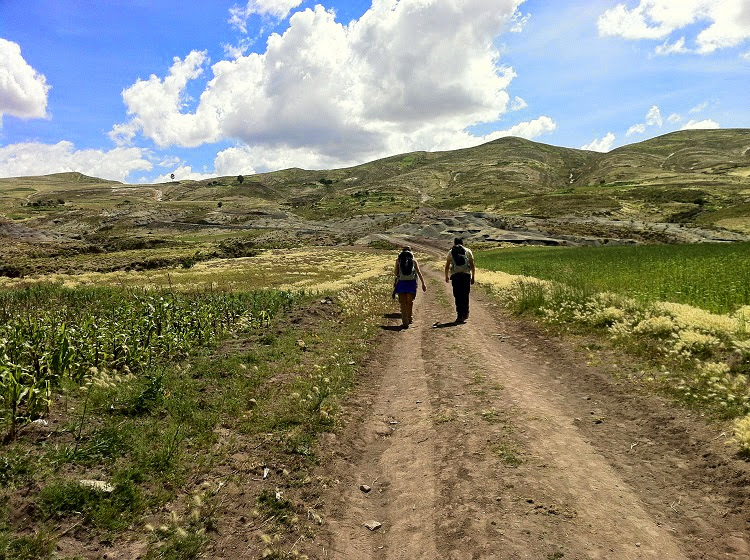 We met at 8am outside Jaku Trekking’s office on Calle Bustillos, where we were met by our driver. He drove us across town to pick up our tour guide. We were told we’d have an English-speaking guide, but on the day we found out that our guide, though very good, only spoke Spanish. This wasn’t a huge problem as we had a professional translator in our group, but it did mean that she spent much of the trip working, on what was meant to be a holiday.

The day began with a pleasant drive out to the small village of Chataquila, 40kms from Sucre. The centerpiece of Chataquila is a distinctive stone chapel which houses a shrine to the Virgin of Guadalupe, the patron saint of Sucre. The original representation of the Virgin was moved from Chataquila to the Chapel of the Virgin of Guadalupe (adjacent to Sucre’s Metropolitan Cathedral) where it has been adorned with so many jewels that it has been estimated that the sale of these gems would make Bolivia one of the riches countries in Latin America. 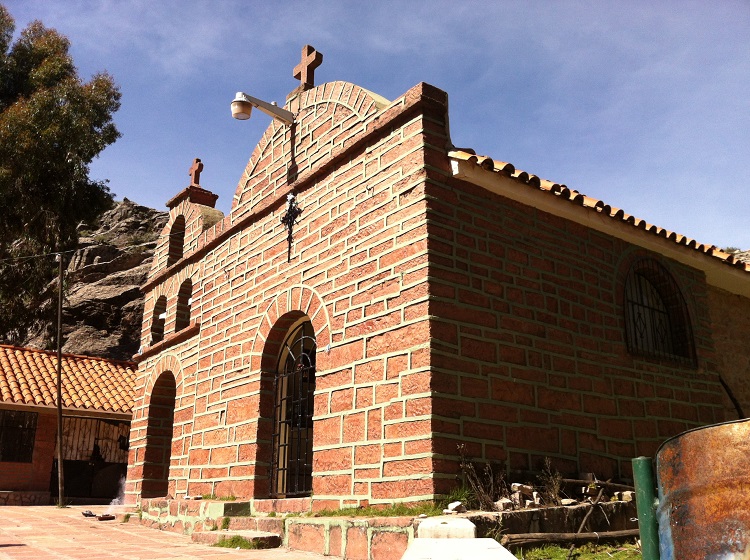 From Chataquila, we started trekking along the pre-hispanic trade route towards our pickup point near the village of Chaunaca. The route runs gently downwards for about an hour and a half, gradually revealing sweeping views of the Maragua crater. 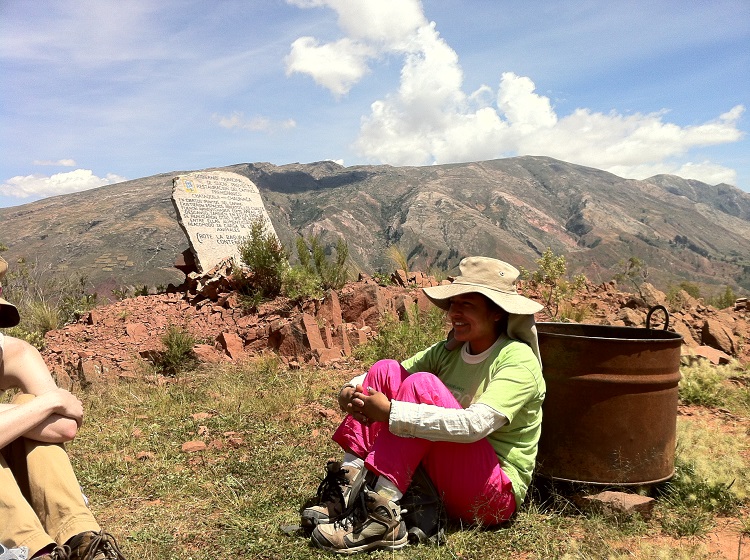 We then went by car to Maragua town, 45 minutes away. Here we had a simple but filling lunch (in a very basic hostel). We then started hiking towards Ninu Mayu, where we would be spending the night. Ahead of us lay an hour or more of fairly grueling uphill trekking. Fortunately for us, our guide flagged down a passing truck and we jumped on the back. After stopping several times to pick up more passengers, our full truck dropped us off at the top of the hill. We were very happy to have saved ourselves the climb, even if it did mean we sped past some of the best views of the Maragua crater, and the ride was too bumpy to take any photos. 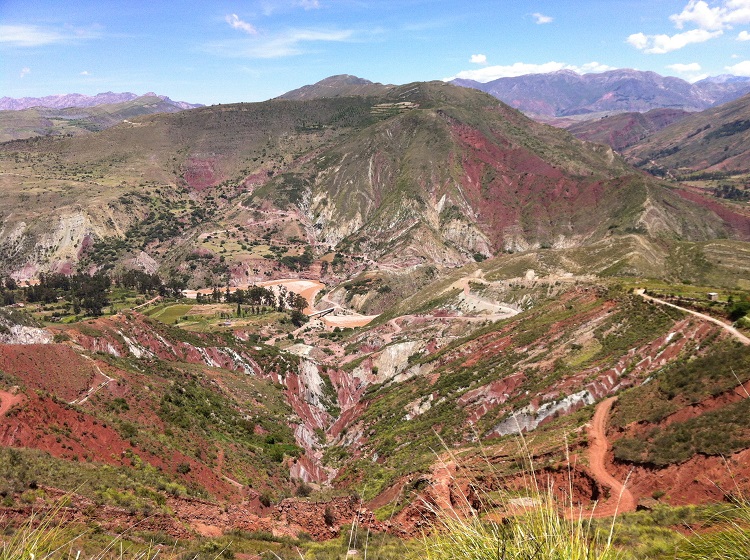 About another 20 minutes of walking, and stopping several times as our guide distributed cocoa leaves to the passing locals, we arrived at the dinosaur footprints at Ninu Mayu. The footprints are embedded in a large sloping section of rock exposed by a recent earthquake. The prints though less numerous than those at Parque Cretacico, could be inspected much more closely. In fact there was no protection of the dinosaur prints at all, other than our guide’s request that we didn’t actually touch them. The prints consisted of three main sets, one by a member of the Rex family, one by a large elephant-like creature, and one by an armadillo-like animal. There were probably about 100 prints in total. 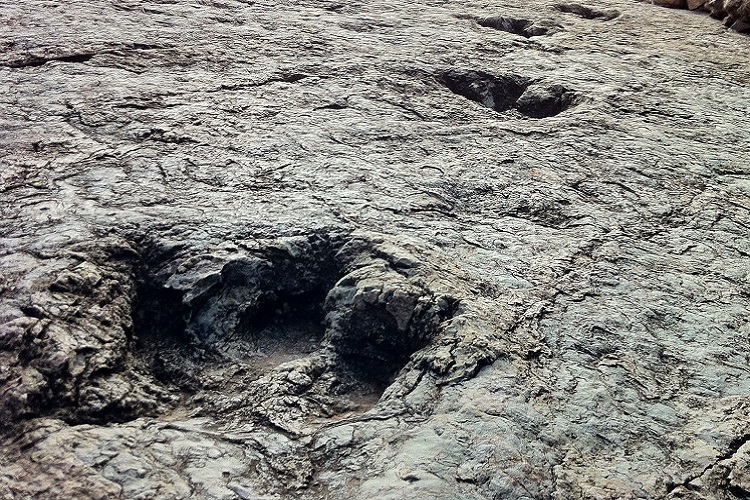 After relaxing at the dinosaur footprints, we made our way to a nearby farm where we would be spending a night with a local family. The small farmstead was home to a range of animals from donkeys to chickens. We didn’t have much interaction with the family as the parents spoke only the local Quechua language, and the children who could speak some Spanish were extremely shy and mainly peeked round the corners of buildings at us, running away whenever we waved at them. The father entertained us by playing the charango (a small, andean guitar), and the mother prepared a tasty wheat soup for us to try, along with some dumplings. This was in addition to the abundant pasta served to us by our Jaku Trekking guide. Later in the evening, we got to watch the family perform an offering to Pachamama (Mother Earth).

After discovering that there was no toilet and making the best of the situation, we retired to bed. Our lodgings were rustic, but reasonably comfortable, wooden beds in small building which was thankfully warm as it had doubled as the kitchen for the night. 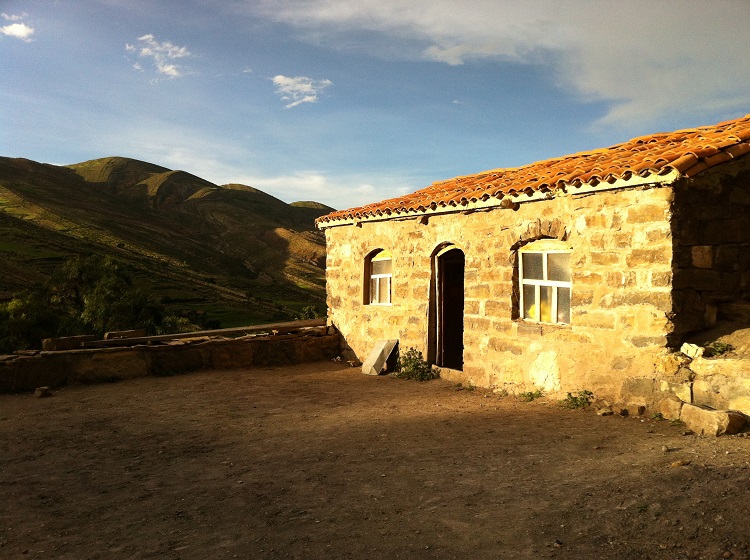 We woke up rested after a good night’s sleep (though any exposed skin was now covered in mosquito bites). We had a good breakfast and cups of cocoa leaf tea, before heading off around 8 or 9am. After a short uphill stretch, the majority of the road ahead of us was downhill and a relatively easy walk. We arrived around noon to the outskirts of the town of Potolo. There we enjoyed a picnic lunch, before making our way into town. 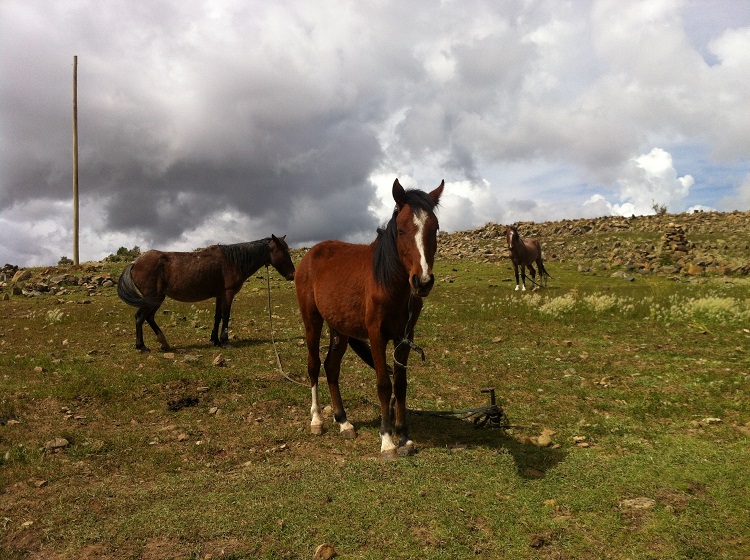 We had three hours to kill while we waited on the public bus which would take us back to Sucre. After relaxing in the sun for a while we headed for what looked to be Potolo’s only real attraction, a museum dedicated to the Jalq’a culture. We had hoped to see, and possibly buy, some of the beautiful textiles for which the Jalq’a are famous. The museum, however, was quite minimal. It contained two main rooms, one of which showcased various Jalq’a outfits, and one which contained displays of the culture’s medicinal plants. Failing to find any textiles for sale there we took up an offer of a local woman to come round to her house to view her offerings, but again came away empty-handed. 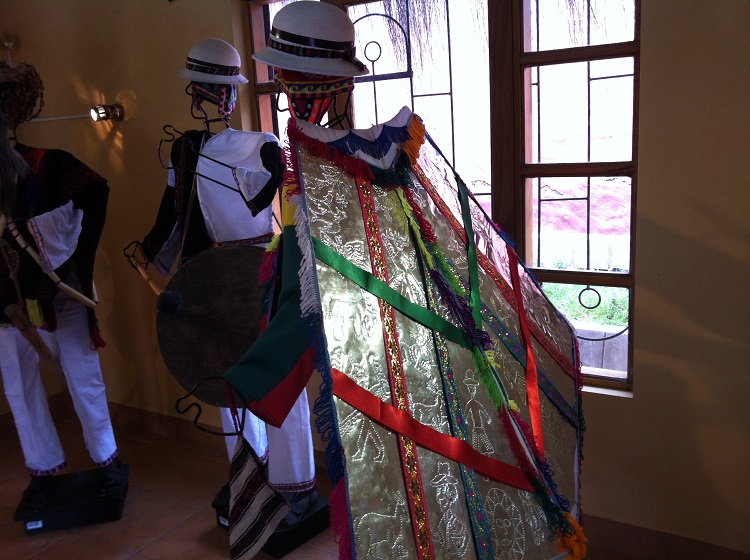 After waiting for another hour or so, the public bus turned up. As we got on, the driver announced that there were no seats left. So the girls sat on the metal platform behind the driver while the guys stepped over bags and sacks of potatoes to take up a standing position in the isle towards the back of the bus. There we remained for the next three hours as the bus lurched precariously around dirt roads flanked by steep slopes. Along the way we continued to collect passengers in what became an increasingly uncomfortable ride. But it wasn’t without its entertaining moments like when the goat escaped, or when one of the passengers wandered into the middle of the road to relieve himself oblivious to the oncoming traffic, or when we all had to duck down at the police checkpoint so the driver wouldn’t get fined for overloading the bus (though in the end he still did). Arriving on the outskirts of Sucre the bus stopped yet again for some unknown reason. After 15 minutes with nothing happening, our guide asked us to get off – happily climbing back over the bags, potatoes and people filling the isle we jumped into a taxi and were soon back to the safety of Sucre. 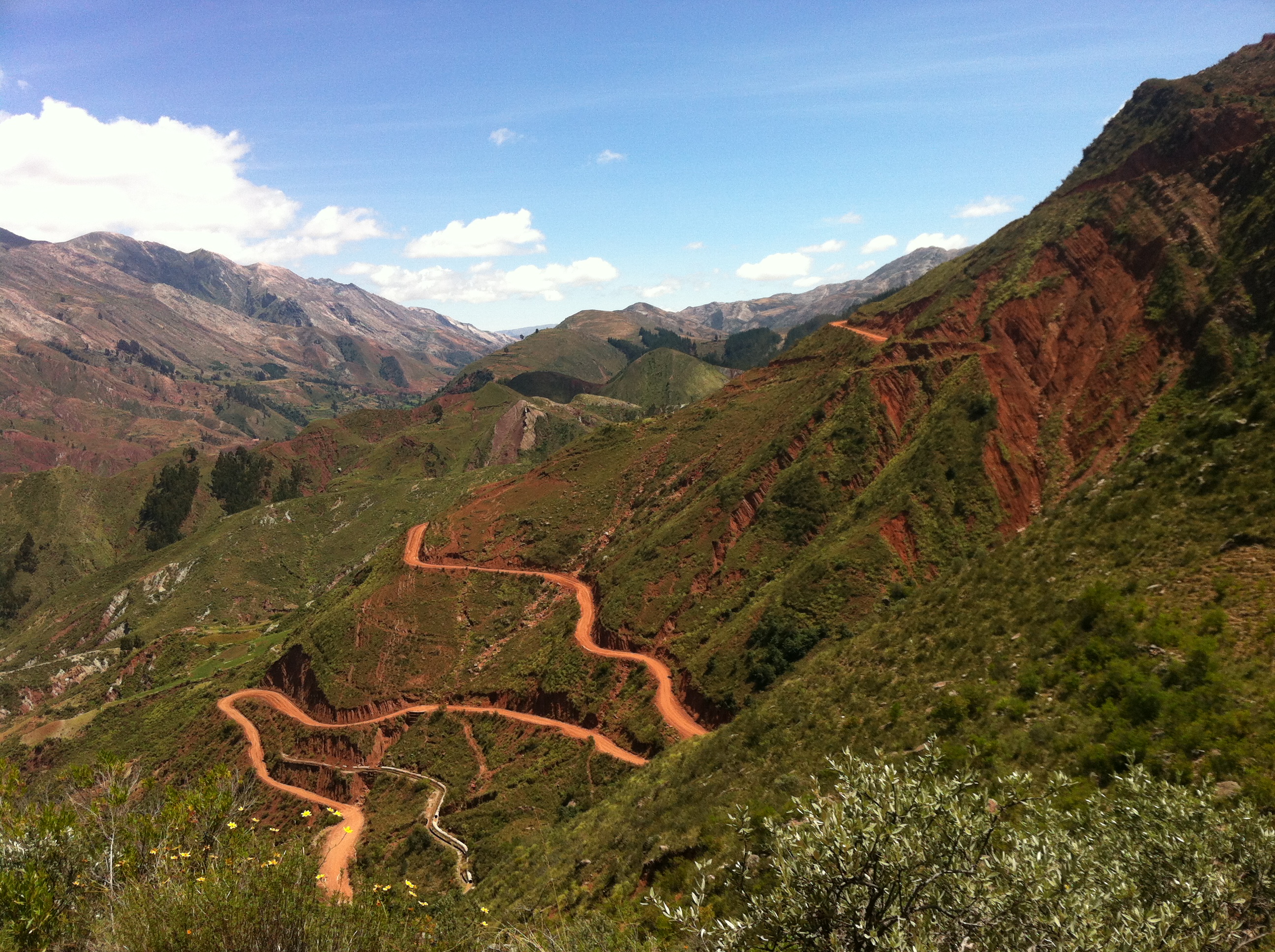 Review of the Maragua Trek

The Maragua Crater is a beautiful and diverse landscape which is definitely worth a visit while in Sucre. The trekking component was highly enjoyable and our guide was really good. However, the shine was taken off the trek somewhat by the lack of an English-speaking guide, and by the 6-7hrs it took us to get back to Sucre after arriving in Potolo. If we were do do the trip again, I’d probably look more closely at the offering of Condor Trekkers in particular who, though a bit more expensive, offered private transport both ways, an English-speaking guide, and reputedly do the best food of any of the tour companies. 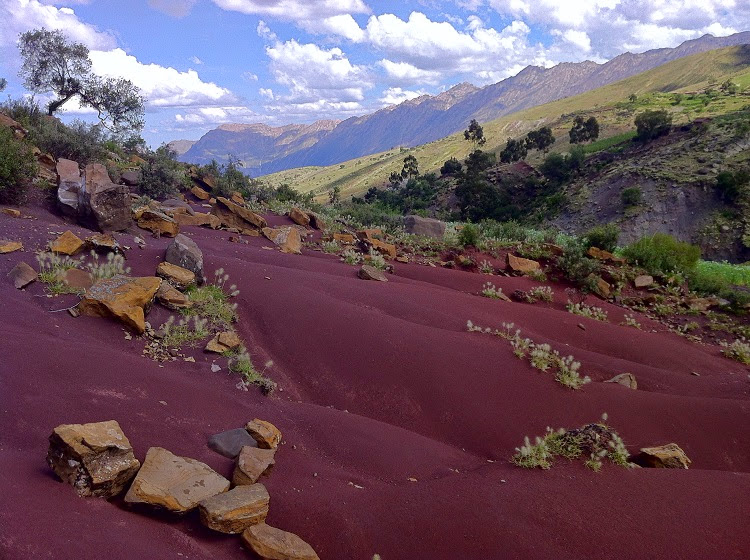 The trek cost 450bs per person, which covered everything we needed: all accommodation, transport, food, the guide, etc.

Jaku offer an alternative itinerary for their two day Maragua trek which takes a slightly different route. The accommodation for the night is in the basic hostel in Maragua where we had lunch, and transport is by public bus on the way to the crater and private transport on the way back. This option would likely save time as it would cut out the three hour wait for the return bus in Potolo. However, the Maragua accommodation was not particularly clean and looked like there would be very little to do in the evening. I think that the family stay option which we took is probably the better of the two options.