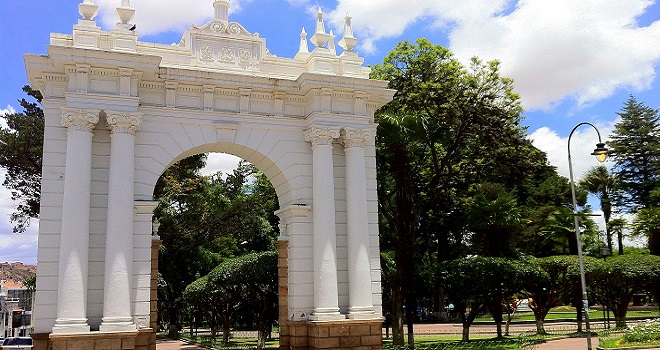 Parque Simón Bolívar is Sucre’s largest and perhaps most beautiful park. The manicured, tree-lined gardens are the perfect place to relax, and enjoy some of the treats the park has in-store.

The elongated park, four blocks from Plaza 25 de Mayo, extends from the pristine Supreme Court of Bolivia all the way to the Estacion Aniceto Arce, which was once one of the busiest train stations in Latin America. The spacious park was created for the Princess of La Glorieta Castle, and is now a popular hangout for a broad spectrum of Sucre’s inhabitants. In the mornings, runners and walkers fill its paths. Later on families, students and couples gather. It is a great place to take a stroll, read, soak up some sun, or enjoy a variety of food from the various street vendors. The ice-cream on sale is reputed to be some of the best in Bolivia, with flavors such as tumbo (a fruit related to the passion fruit). For something warmer, there are papas rellenas, a deep-fried snack of hard-boiled egg encased in potato. You’ll also find homemade cakes on offer, and cotton candy on sale for around 10 cents. 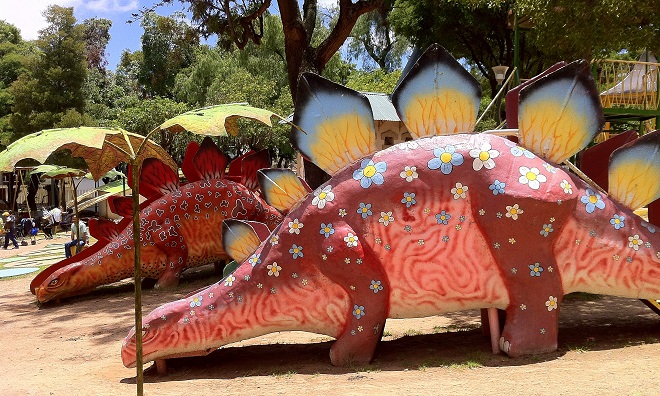 A popular feature in the center of the park is the miniature version of the Eiffel Tower. The red ironwork structure, while not an exact replica of the French landmark, fully deserves the name Eiffel Tower – it too was designed by French engineer Gustav Eiffel. The components were shipped over from France in 1908 and assembled by local engineers, Federico José Federico Martinelli and Hammel. It was officially opened on 25 May 1909, marking the centenary of the 1809 uprising. For the first 16 years of its life, the tower functioned as a weather station. In 1925, to mark another centenary (this time the founding of the Republic of Bolivia) the tower was relocated to its current location in Parque Simón Bolívar. Sucre’s Eiffel Tower now functions solely as a tourist attraction. It is possible to climb the two-story tall tower via an internal spiral staircase for a view over the park and city. Continuing the French theme, the park also hosts a replica of the Paris’s Arc de Triomphe. 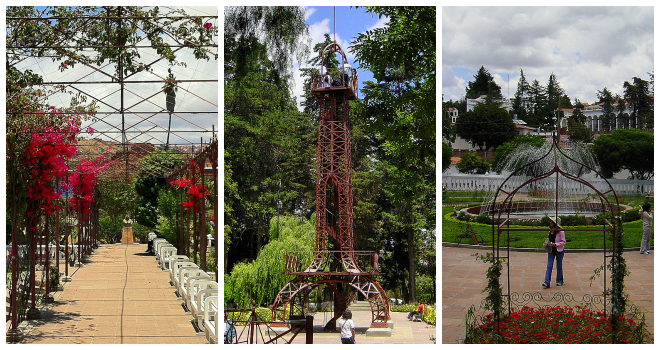 Bolivar Park’s rose garden is home to the Fuente del Bicentenario, a water fountain built to commemorate the bicentenary of the 1809 uprising. Every Friday, Saturday and Sunday night, a free choreographed light show is put on, with the illuminated fountain “dancing” in time to national and international music. The spectacle starts around 7-7.30pm and lasts until 9pm. The fountain was constructed through a collaboration between the Municipal Government of Sucre and Fancesa cement, the same company responsible for Sucre’s Dinosaur Park. 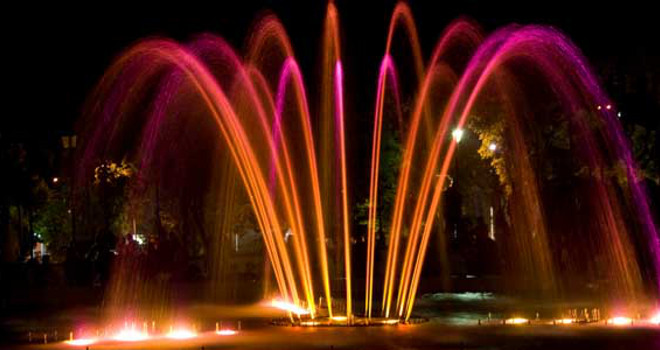 The park houses a number of statues, including that of freedom fighter Simón Bolívar himself, and former president Aniceto Arce (after whom the adjacent station is named). A swimming pool, La Piscina del Parque Simón Bolívar, is to be found in the park too. The 50 meter municipal pool is available for lap and recreational swimming, private lessons and water exercise. It also features a sauna and snack bar. While the park is easily walk-able, there are a number of other transport options available; there are karts, quad bikes and horses for hire.

A recent investment of Bs 5.2 million has focused on improving the park in a number of areas, such as an improved playground and recreational area which incorporates elements of Sucre’s landmarks such as the dinosaur park and Glorieta Castle.

Have you been to Parque Simón Bolívar? Tell us what you thought in the comments.