Each year, in the first half of September, the serene city of Sucre transforms into a voracious party zone featuring non-stop dancing, joyful music, delicious food and elaborate costumes, all in honour of Sucre’s patroness, the Virgin of Guadalupe. 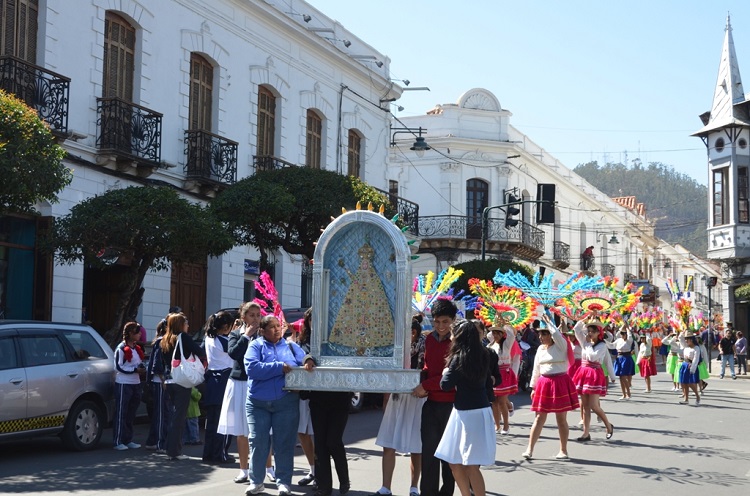 History of the Virgin in Sucre

Affectionately known as Mamita de Guadalupe, the Virgin de Guadalupe is not only the patron saint of Sucre, but one of the most venerated saints in all of Latin America.

Devotion to the Virgin began over 400 years ago when in 1601, Reverend Fray Diego de Ocaña, also a painter, gifted to Sucre a beautiful reproduction of Spain’s famous “Black Madonna”, a painting renowned not only for depicting the Virgin as having brown skin, but for the many miracles attributed to the image. 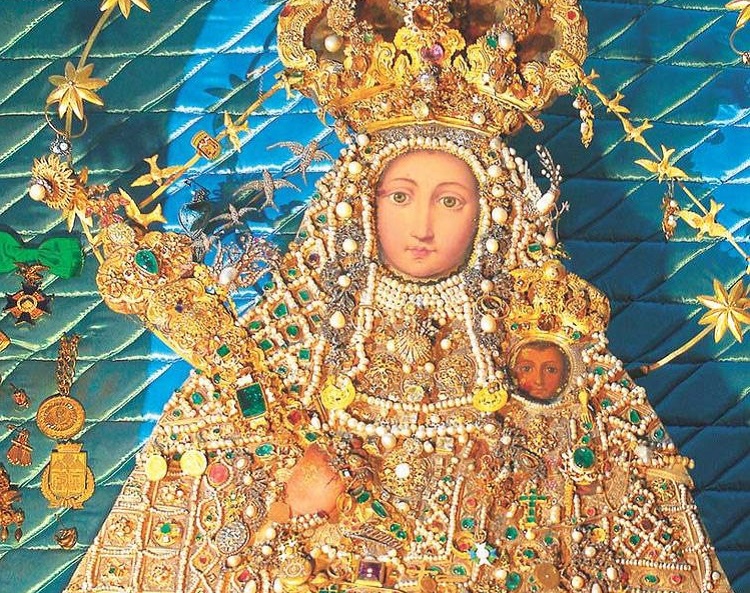 Inspired by the indigenous population’s ardent devotion to the Virgin, Fray built a shrine in the nearby village of Chataquila where local communities could go and pray to the image. Eventually, the original representation of the Virgin was moved from Chataquila to the Chapel of the Virgin of Guadalupe (adjacent to Sucre’s Metropolitan Cathedral) a shrine which is now visited by pilgrims from all over Bolivia and the rest of the world.

Over the years, wealthy colonial parishioners have adorned both the shrine and the canvas with precious jewels including an estimated 298 thousand pearls and about 21 thousand diamonds. The total value of the shrine is so valuable it is believed the sale of these gems would make Bolivia one of the richest countries in Latin America. 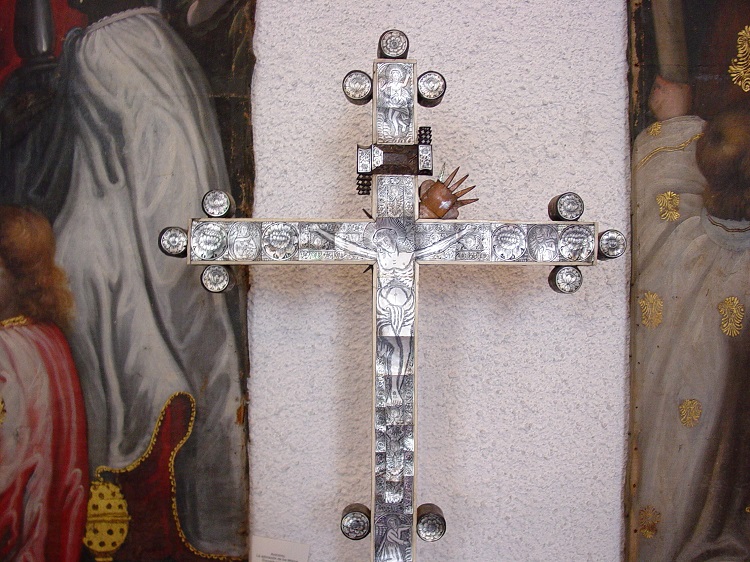 According to local legend, the painting of the Virgin de Guadalupe was first discovered when people in the village of Chataquila spotted a lost mule with a big bundle on his back wandering about the bushes. Thinking the bundle contained treasure, every man and his dog attempted to catch the poor beast who put up a strong fight to evade capture.

Eventually, with the help of authorities and members of the church, the locals managed to catch the mule and unload its cargo. To their great surprise, the bundle was in fact a beautiful painting of the Virgen de Guadalupe.

From that day on, a lavish festival has been celebrated each year in the Virgin’s honour.

Since the early seventeenth century, the veneration of the Guadalupe Virgin has been a popular tradition among the people of Bolivia.

For weeks in advance, Sucre’s surrounding communities gather in the city centre to practice parading through the streets, perfecting their routines so as to ensure the festival goes off without a hitch.

The massive two day parade begins on the weekend closest to September 8. Celebrations involve thousands of participants parading 7km from Mercardo Campasino all the way to Plaza 25 de Mayo, where tiered seating overflowing with spectators await. Despite the blaring heat at this time of year, participants energetically sing, dance and march non-stop into the early hours of the morning, all while donning heavy and elaborate costumes; a sacrifice made in honour of the Virgin.

One of Bolivia’s most defining characteristics is the magnificent combination of traditional indigenous beliefs and Catholicism. Majestic folkloric dances and traditional music are a highlight of the festival along with ubiquitous marching bands, roaring fireworks and typical Bolivian cuisine. Also featured in the festival program is a huge Mass in the main plaza as well as a reverent procession of the Virgin. 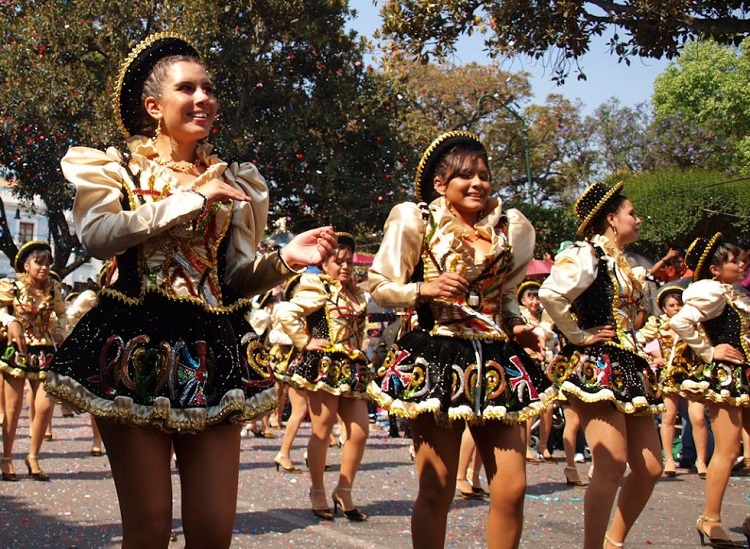 Incessant traffic jams are a consequence of the festival as cars emblazoned with unique objects weave in and out of the city streets. An ode to Sucre’s Mercado Central, many of the cars are decorated with fruit, vegetables, meat, toys, pots, cutlery and colourful clothes. Festival goers also pin fake money, houses and electrical goods to the cars while praying to the Virgen de Guadalupe in the hope of good fortune and success. Toward the end of the celebrations, each car is welcomed back to Mercado Central by jubilant music and fireworks. 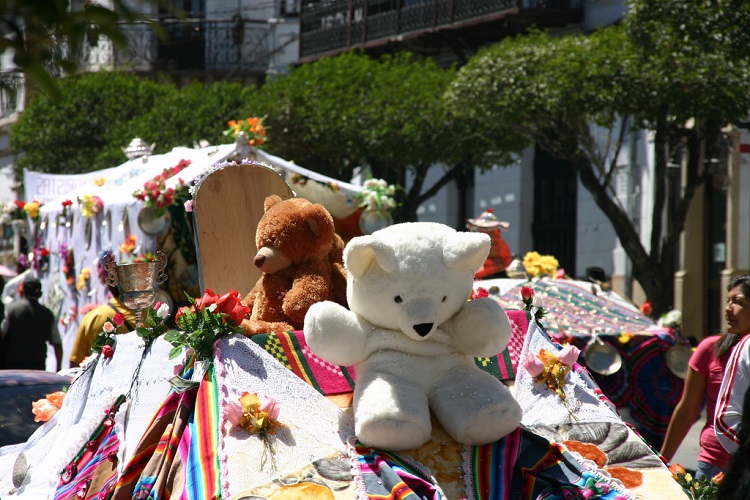 The most important part of the festival however is the finale, when the Virgin finally reaches her shrine. During this climactic stage, a large troupe of male and female dancers approach the finish line. Just before the end, the women break away from the men, forming a tunnel for the males to dance through, thus allowing them to show-off their moves with passion and pride. Many dancers by this stage are exhausted, so it’s not uncommon to witness some participants crawling the last 30 or so meters to the shrine. 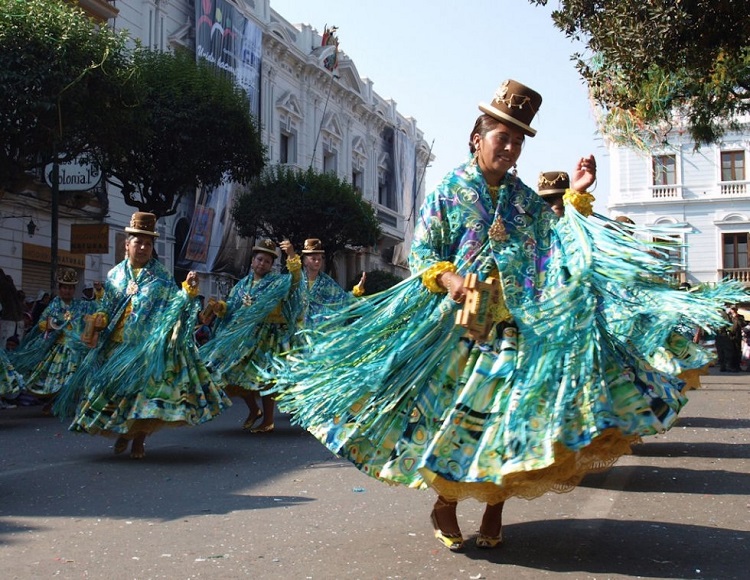 A weekend of fun and excitement, the goal of many a festival goer is to offer up passionate prayers in the hope the Virgin will answer them. A sight to behold, bystanders are often struck by the intensity in which the people of Sucre express their piety to the Virgin.

A one-of-a-kind event and one not to be missed, the Virgin de Guadalupe Festival is one of the country’s most exuberant celebrations.

The first day of the Virgin de Guadalupe Festival beings around 9am with fireworks signalling the start of the proceedings. Celebrations continue all day long with music blaring and people dancing well into the early hours of the morning.

During the festival, all the main streets throughout the city are shut down. Every inch of pavement along the parade route is chalked off in sections by people renting out seats to spectators. In order to secure a spot for the day, tickets should be bought in advance either through a hostel or by calling one of the many phone numbers written in chalk along the parade route.

Ticket prices are defined according to position, the cheapest being found at the start of the parade on Germán Mendoza Avenue and the more expensive being found along Venezuela Avenue toward the main plaza. The average price for a ticket is around around Bs. 50 ($7 US), however it’s not uncommon for a two metre section of roadside sold through a scalper to cost around Bs. 1000 ($150 US) for the day. 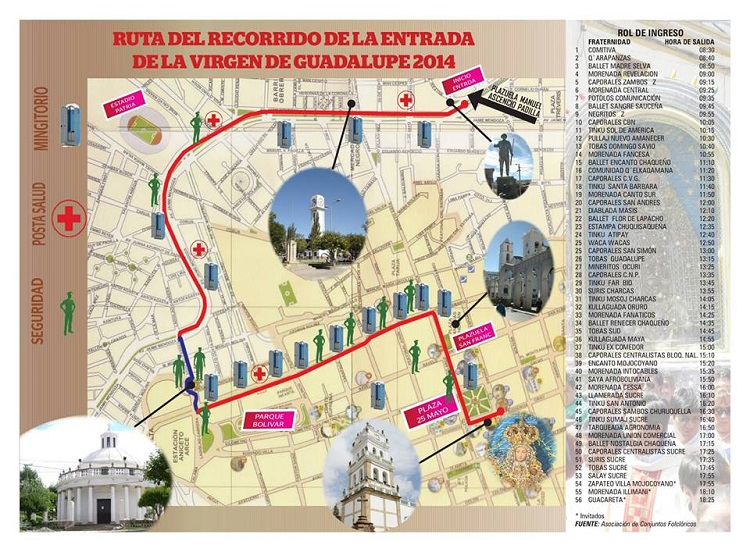 Have you been to Festival de la Virgen de Guadalupe? Share your experience in the comments below: