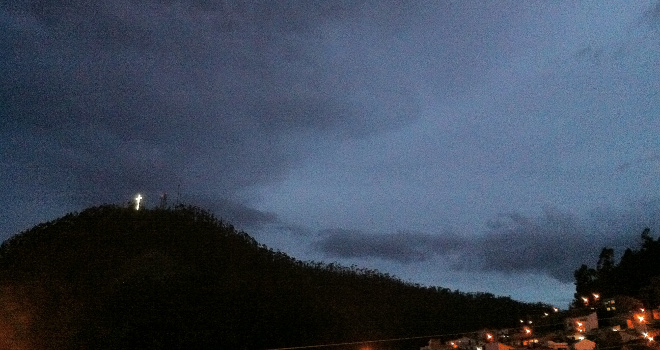 Sucre lies at the foot of the twin hills Sica-Sica and Churuquella.

The peak of Cerro Sica-Sica (or Sica-Sica hill) is 2,732m above sea level, but only a few hundred metres above Sucre itself. At the top of a hill is a large crucifix which is illuminated at nights and often glows eerily against a backdrop of low-lying cloud.

Sica Sica offers panoramic views over the city, and climbing it is about a 2hr round trip from the center of town, making it a great way to spend a sunny morning (or afternoon). The climb itself is challenging but attainable and would be suitable for anyone with a moderate fitness level or higher.

The path itself can become muddy and difficult after rain, so it is best hiked after several rain-free days. Also, please be aware that stray dogs have been sighted along the Sica Sica track, something to take note of, especially if you’re hiking alone.

Sica-Sica is also a popular place for rock-climbing due to its proximity to the city and the presence of several rock-faces with routes suitable for a range of skill levels.

Most climbs take place on two adjacent walls of a crag located on the western side of Sica Sica. Each wall is 25m high and has 7 routes. The easier wall, the “slab”, has a mix of cracks, jugs and crimpers (small, challenging holds), while the harder wall has an overhang on every route. The slab ranges in grade from 5.6-5.9 (US), while the overhang ranges from 5.7-5.11a.

For advanced rock-climbers, there is Garzilazo, a 25m sandstone crag in the valley below Sica Sica. Eight routes ranging in difficulty from 5.10a to 5.12b.

A number of Sucre’s tour companies offer rock-climbing tours to Sica Sica, including