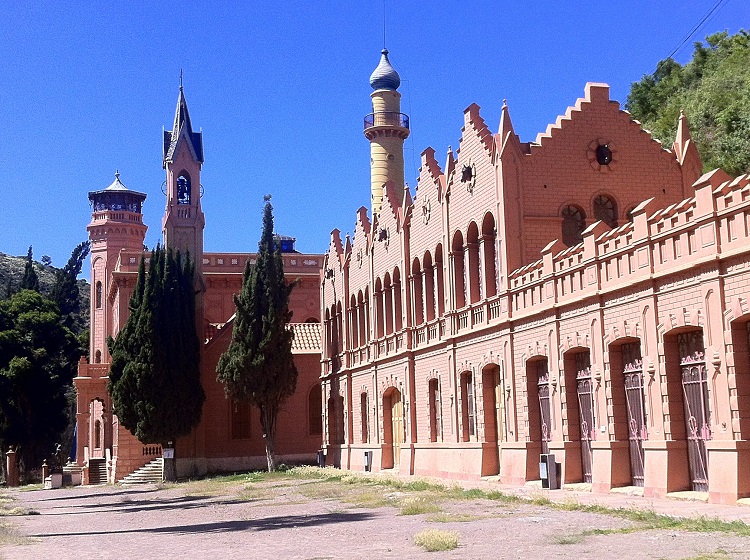 One of the oddest chapters in Bolivia’s history is the tale of its only prince and princess and the pink, crazy, fairy-tale castle they built on the outskirts of Sucre: El Castillo de La Glorieta (The Castle of La Glorieta).

The Prince and Princess of La Glorieta

Born in Potosi in 1850, Francisco Argandoña studied mineralogy in Chile before moving to Sucre in 1968 where he began working for the Huanchaca Mining Company. In 1874 he married Doña Clotilde Urioste, who came from a wealthy Spanish family. The couple were involved in extensive charitable works, including the establishment of the “Santa Clotilde” and “San Francisco” orphanages. 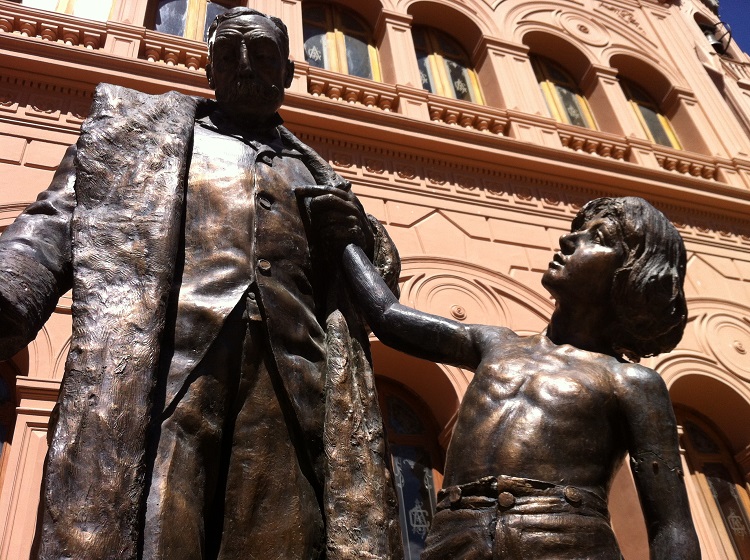 While with Huanchaca, Francisco managed to amass 200,000 pesos worth of shares in the company. Production of silver from the Potosi mines peaked around the 1880s, and the Huanchaca Mining Company was one of the main beneficiaries, excavating 50,000 tonnes of silver ore with a value of over $40 million. This brought great wealth to Argandoña, who went on to found the “Francisco Argandoña” bank which operated between 1892 and 1919.

Francisco was named Bolivian Envoy to the Palacio de la Moneda in Santiago de Chile, and subsequently Envoy Extraordinary and Minister Plenipotentiary to the Holy See and the courts of Europe. The couple moved to Paris in order to fulfill this role and represent Bolivia in the Courts of Rome, St. Petersburg, Berlin and Madrid. 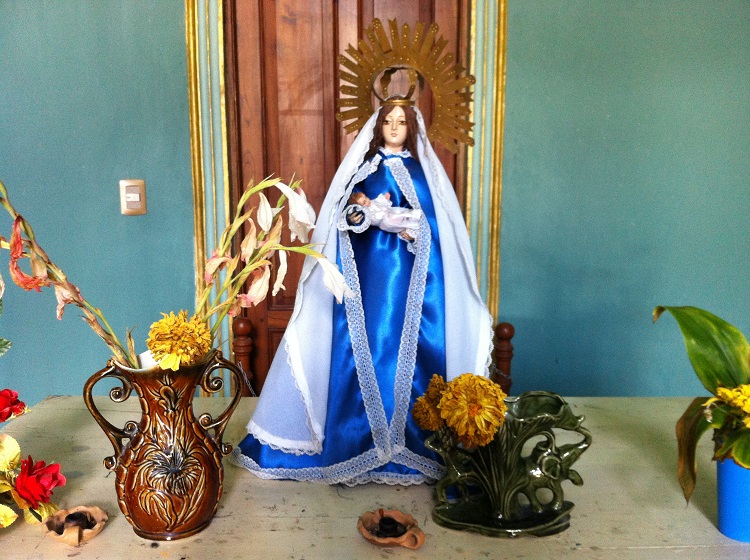 Following an encounter with Pope León VIII in 1898, the Pope, much impressed with the couple’s charity work, bestowed the title of Prince and Princess upon Francisco and Clotilde on 28th December that year, creating the principality of La Glorieta.

Francisco passed away on August 27, 1910 after a short illness. Princess Clotilde eventually returned to Sucre in 1932, whereupon she was active in the development of Sucre and the surrounding areas. Clotilde helped establish the Sucre – Potosi railway. a felt-hat factory, and the Teatro 3 Febrero.

Bolivia’s only princedom came to an end 35 years after in began, in 1933 with the death of the childless Clotilde. 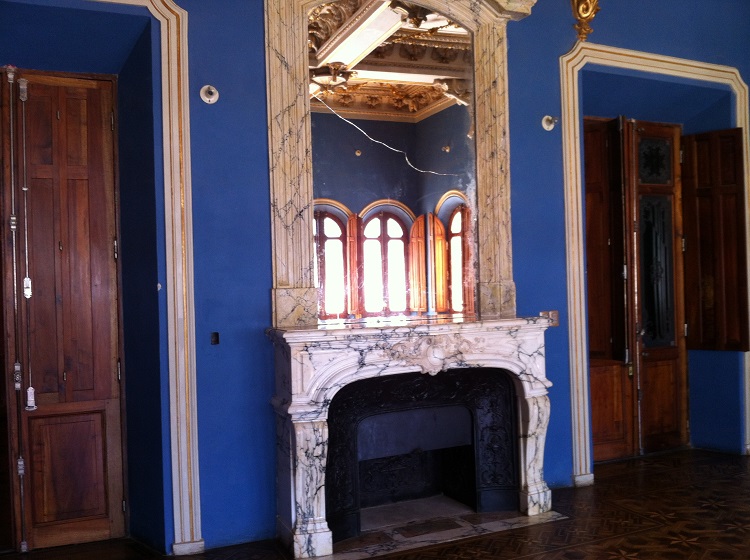 In 1893, work began on the couple’s new home, La Glorieta Castle. Designed by an Italian and British architect, the building was completed it 1897.

The building is a eclectic, almost fantastical construction dominated by three towers: a Gothic chapel tower, the Russian-inspired “Prince’s tower” and the octagonal, Chinese Pagoda-topped “Princess’s tower”. The fusion of styles continues elsewhere in the structure, with Dutch Renaissance, Byzantine and Italian influences being prevalent. The entire building is painted pink, and has a fairy-tale quality about it. 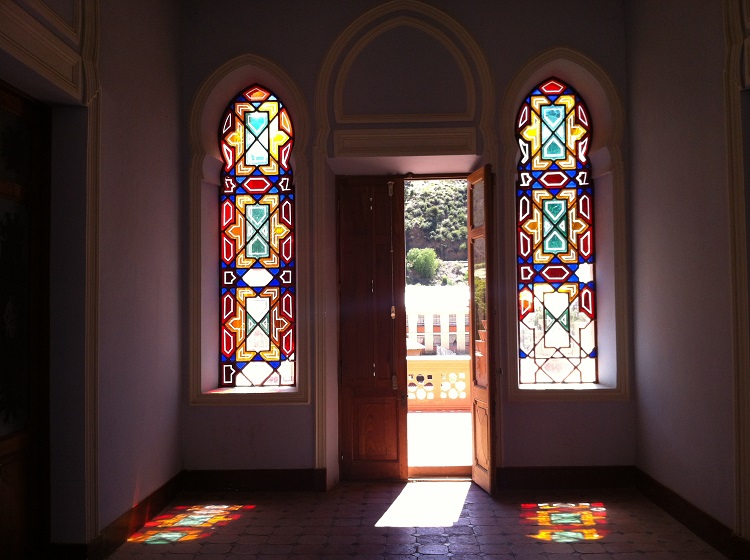 Inside, the building is now largely empty. Original features remain such as marble fire-places, elaborately decorated ceilings (with angels representing the orphans for which the couple cared), and monogrammed windows.

In 1967 ownership of La Glorieta was transferred to the armed forces for the purpose of establishing a military academy. In 1970 it was declared a national monument, and in 1987 ownership was again transferred, this time to the Corporation for Development of Chuquisaca (CORDECH) with the intent that it be restored and re-purposed as a tourist attraction. A lack of progress on the restoration works saw the castle later transferred to its current owner, the Prefecture of the Department of Chuquisaca. 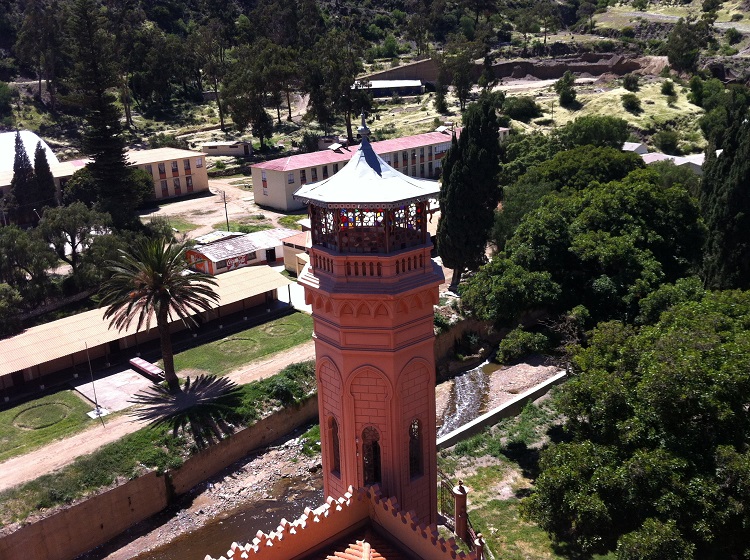 The castle is open to visitors from 9am-4.30pm Tuesday – Sunday.

There is no cost to explore the outside of the building. Entry into the castle itself costs 20bs for foreigners, 10bs for Bolivians and 5bs for children of 6-12 years. If you want to take photos or video within the castle, you need to purchase an additional ticket for 10bs.

Getting to La Glorieta Castle 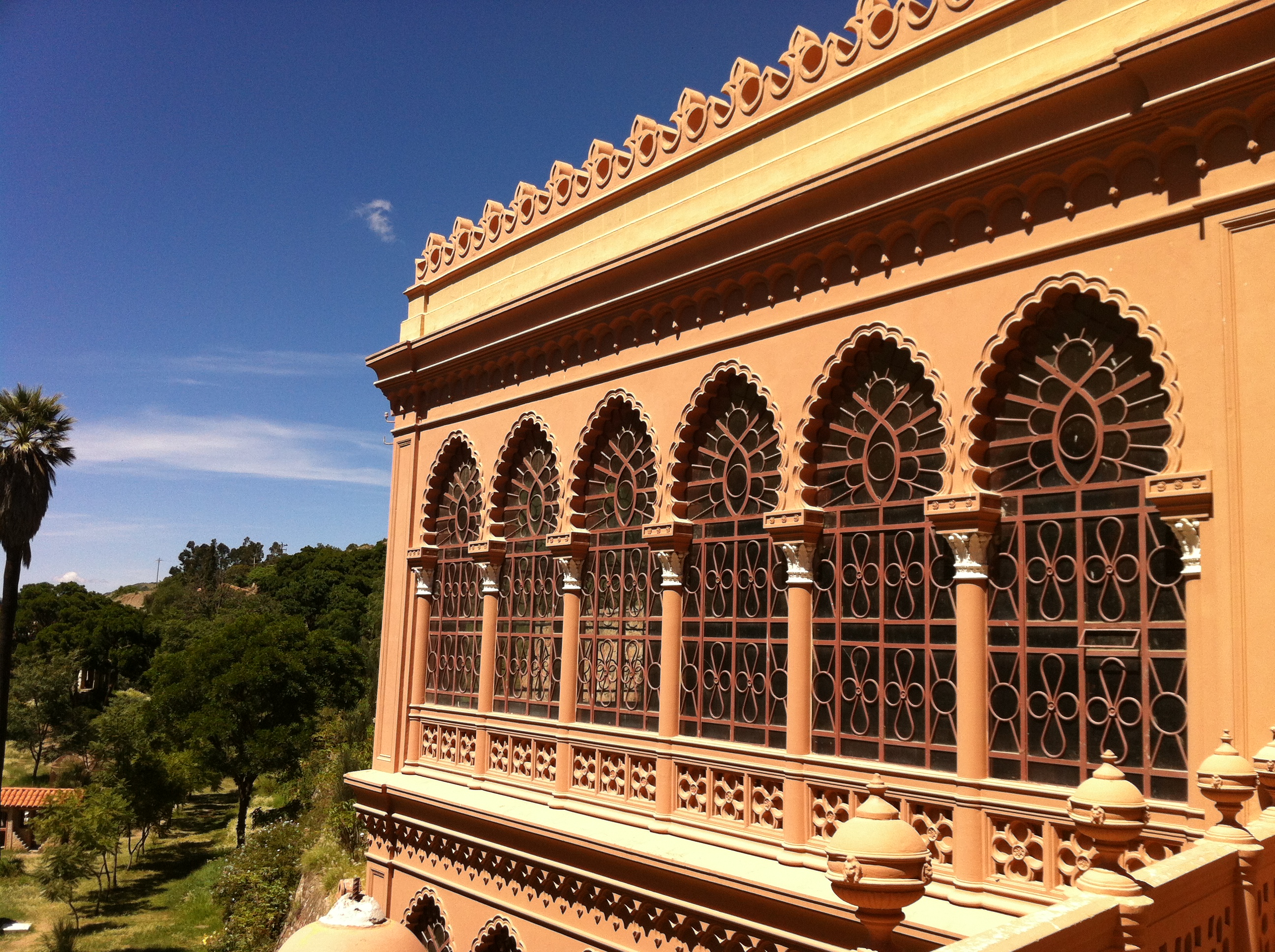 El Castillo de La Glorieta is located 5.5km from the center of Sucre, on the road to Yotala and Potosi. The castle is situated beside a military academy (liceo militar), and you must pass through the academy’s checkpoint on the way to the castle (which lies 100m or so past the checkpoint. Both the castle and the liceo are on a side road just off the main Sucre-Potosi road, and are clearly signposted.

It is possible to walk to La Glorieta, which is a 1 hr stroll through the poor but pleasant El Tejar neighborhood which then gives way to green and peaceful countryside. Alternatively you can take the number 4 micro bus from the centre of town – the bus runs along Calle Junin stopping outside Mercado Central (corner of Av. Hernando Siles) as well as out the front of Universidad San Francisco Xavier (on the corner of Estudiantes and Junin). The other option is to take a taxi which will cost around 15bs ($2 US) for 2 people. Travel time via local transport is around 15 minutes.