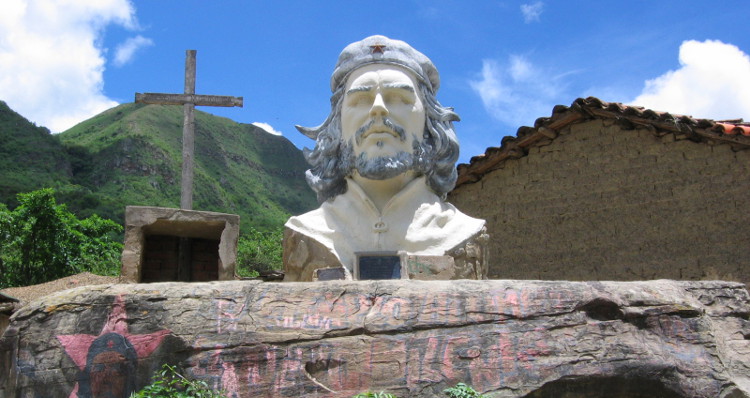 Midway between Sucre and Santa Cruz lies the tiny village of La Higuera where Ernesto Che Guevara was captured and killed in 1967, not far from Vallegrande where his body was secretly buried in a mass grave (until its location was revealed in 1997 and the remains moved to Cuba).

If you are travelling from Sucre to Santa Cruz, you may like to consider making a side trip to visit these historically significant sites.

One way to visit the sites is as part of an organized tour of the “Ruta del Che”, which can be arranged by a number of tour agencies in Sucre. These tours typically last 3-6 days and cost between US$200-500.

An alternative is to make the journey on your own. From Sucre you can take a bus to Villa Serrano which will take around 5 hours. Depending on the availability of connections, it may be necessary to spend a night in Villa Serrano before continuing. From Villa Serrano you then take the bus towards Pucara. Get off the bus at the turnoff to La Higuera (ask the driver to let you know when you reach it). The turnoff is about 7kms from the village itself, so you can either walk the mainly downhill route, or if you call ahead from Villa Serrano you make able to arrange a taxi pickup from the junction for around 80 bolivianos.

A third option is to accept some backtracking and take a bus from Sucre to Santa Cruz (15-16hrs), and then from Santa Cruz take a bus to Vallegrande (5-6hrs). From there a taxi can be taken directly to La Higuera. While a longer distance, it has the advantage of more frequent buses.

After your stay in La Higuera you can make your way to Vallegrande in several ways. One is to return to the junction (again a 7km walk or an 80 bolivianos taxi) and meet up with the Villa Serrano to Pucara bus. Or alternatively you may be able to take a taxi or hitch a ride with someone from the village all the way to Villa Serrano.

From Vallegrande there are multiple bus departures daily to Santa Cruz, a 5-6hr journey.