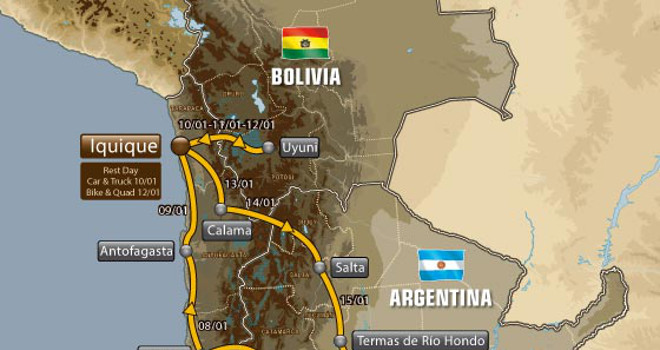 Following the success of the Dakar Rally’s first visit to Bolivia in January 2014, it has been announced that the Rally will again return to Bolivia in 2015.

The 2015 Dakar Rally will be an extended 20 day race starting and ending in Buenos Aires and taking in Argentina, Paraguay, Chile and Bolivia.

The Bolivia stage will be open to cars in 2015, not just quad bikes and motorbikes as was the case in 2014.

The Rally will make its way from Buenos Aires across to Chile and up the coast to Iquique. From there route makes a round trip into Bolivia, heading to Uyuni, taking in the departments of Oruro, Potosi and Uyuni as it does so. The Dakar Rally will unfortunately not make it as far as Sucre. The Rally will then return by the same route to Iquique before making its way back to Buenos Aires through a different, more northerly route.

The rally will visit a number of locations in Bolivia, including Northern Potosí, the Salar de Uyuni, the towns of Garci Mendoza and Belen de Andamarca, Lake Poopó, Orinoca and Patacamaya.

The Rally will be in Bolivia between Saturday 10 Jan 2015 and Monday 12 Jan 2015. The quad and motorbike categories will enter Bolivia on Jan 10th, with the car category following behind on 11th Jan, marking the first time that the Dakar car category has entered Bolivia.

It is expected that around 1/2 million people will visit the Bolivian stage of the race, which will be protected by around 6,000 military and police personnel.